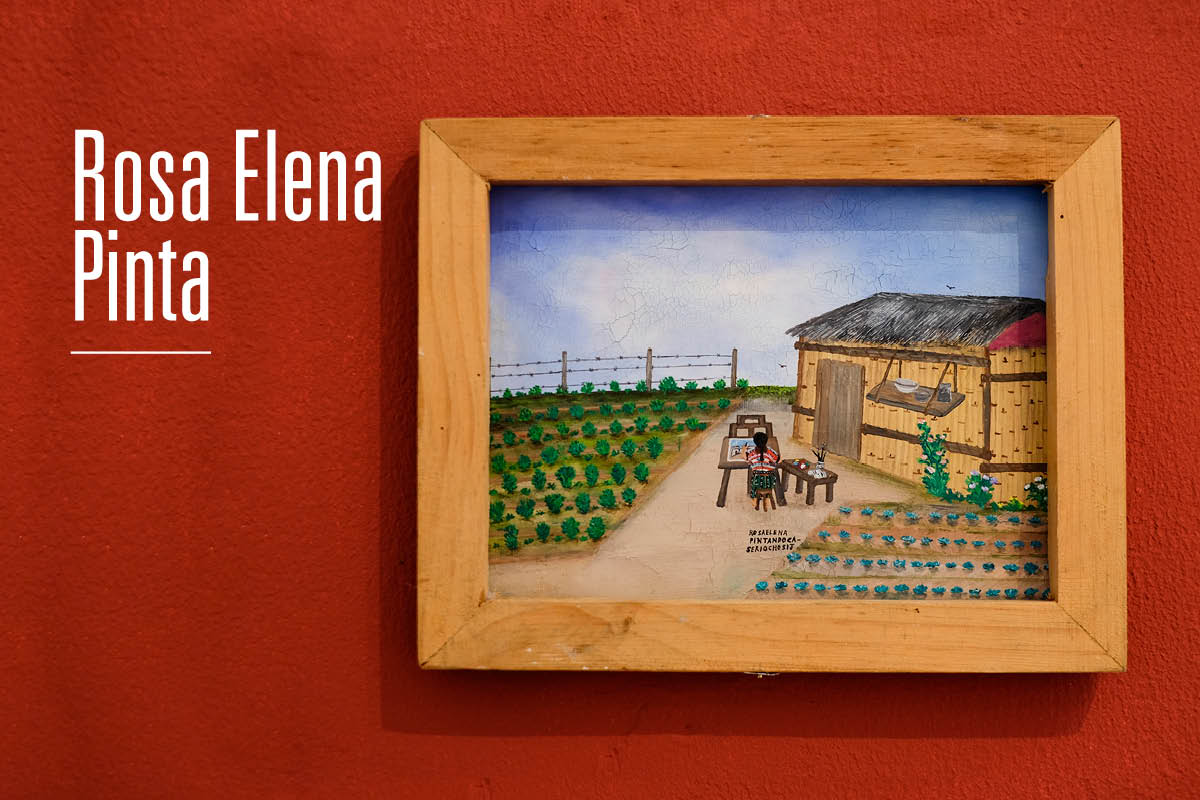 Rosa Elena Curruchich (1958-2005) has been considered by many researchers and artists to be the first female painter in San Juan Comalapa, a municipality of the Chimaltenango department, in Guatemala. She began painting from a self-taught practice in the mid 70s. Her work documented customs, work life, religious festivals, family and community ties, always from an attentive look that highlights the important role of women within the processes of indigenous social organization.

Rosa Elena was part of a family of painters (she was the granddaughter of Andrés Curruchich, who became one of the most renowned painters in Comalapa, thanks to the international recognition he received during the 50s). However, her pictorial work was not well received due to the misgivings and prejudices associated with the strong masculine tradition of painting in her community. According to Linda Asturias de Barrios and Mónica Berger, Rosa Elena was so “harshly critiqued” and  “ felt so pressured” that she even “changed address”. The miniature format of her work responds to the fact that much of her work was done in secret. According to local testimonies, her husband, an authoritarian person, forbade her to paint. But also, members of her own family posed strong resistance to her dedication to the trade, which at times resulted in rejection and solitude.

Her first exhibition was in 1979 at the French Alliance in Guatemala City, where she sold all her works. After that, she maintained the small format as a distinctive mark of her work. This also allowed her to transport it with discretion at times when Guatemala was going through a violent civil war. At the end of the 70s, Comalapa was the scene of clashes between the army and guerrilla groups. According to Asturias de Barrios and Berger, Rosa Elena “ wrapped the miniatures carefully in a tzute [headband or handkerchief] or in her perraje [blanket], which she then cautiously brought to the capital to sell to people of her trust in absolute secrecy.”.

The artist defines her work as “kaqchikel mayan paintings”, in opposition to derogatory terms such as “primitivist art” or “naive”. These narrate different social activities in San Juan Comalapa, daily stories of joy and sorrow, incorporating brief texts where she describes the characters and their actions. Her images highlight the artisan tradition that supported her community economically (the production of candles, bread, amongst others) and especially the textile production and intense coloring of the perrajes and huipiles that she paints meticulously. Rather than offering a look modeled for external tourist consumption, Rosa Elena (and other female painters of her generation) proposed a situated representation that vindicated the affective and political value of tasks usually dismissed by male painters. Her works also documented the forms of violence against women, as well as the punishments that men received for sexist attitudes and harassment.

Her paintings Presentando a las mujeres que construyen casitas (ca. 1980’s) or Las capitanas del agua potable (ca. 1980) are eloquent to show the protagonism of women in tasks considered masculine from the urban and western perspective, pointing out the collective responsibility for the territory. Several pieces from those years are also a testimony of the transformations of the indigenous communities and the ways of negotiation with the processes of urban modernity that inevitably affected the continuity of certain ceremonies and celebrations of Mayan spirituality.

Two of the works exhibited here are outstanding for showing self-representations of the artist herself. In one Rosa Elena is painted selling candy on the anniversary of the caserío San Balentin. The work evokes one of the traditions of the working life of women, and in particular the work that she did in the first years of her life where she learned to make traditional sweets with the intention of dedicating herself to the trade and thus sustain her family . In the other piece, entitled Rosa Elena painting Ochosij farmhouse (ca. 1980s), the artist appears de espaldas, painting on an caballete, in the middle of a rural space. The image offers a displacement of the usual representations of community customs towards the scenarios of the so-called landscape painting, another of the important pictorial styles in Comalapa. However, this work can also be read as a defiant and affirmative representation of her right (and of woman’s possibilities) to exercise the craft of painting, even when that meant facing selfishness and discrimination.