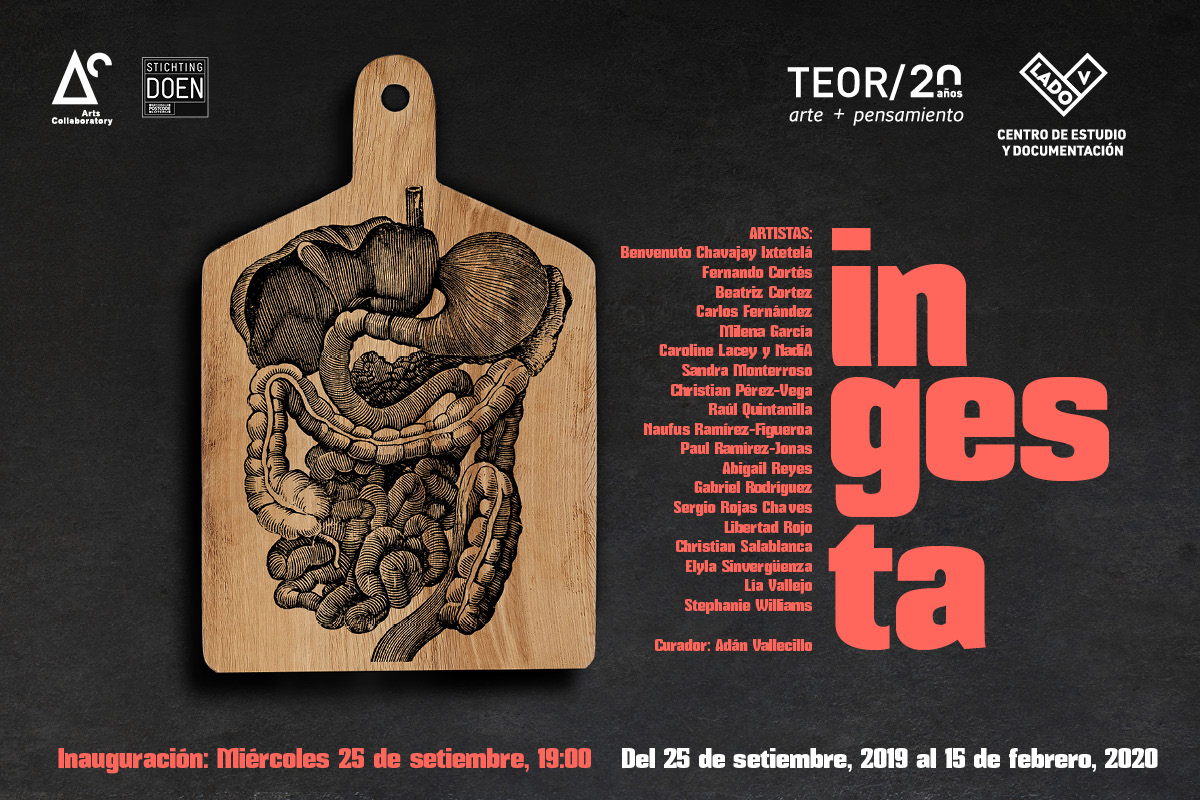 “The gas tank of a midsize car burning bioethanol holds 50 liters (about 13 gallons). To produce that much bioethanol, 358 kilograms (789 pounds) of corn must be destroyed. In Mexico, in Zambia, corn is the staple food. A Mexican or Zambian child could live off 358 kilograms of corn for a year.”

Food, as a subject, has had a significant presence throughout the history of art. From precolumbian artifacts, and Renaissance banquet scenes, to contemporary art, many of the artworks inspired by culinary references entice an appreciation of foodstuffs as primary stimuli for the senses, while simultaneously activating cultural and ancestral memory.

What reactions does food provoke in terms of the imaginary? What happens when one shifts from physical sensation to interpretation?

“One eats with one’s eyes” as the saying goes. The artists included in this exhibition have fruitfully exploited this idea in order to reconfigure our basic relationship with food. Whether by starting from the sensorial qualities of food: simple, salty, sour, sweet, bitter, soft, crunchy, juicy, creamy, spicy, hot, cold, warm, etc. Or by revealing lesser known, or less seen, ingredients, their work unravels further layers of meaning, from scientific, to economic, historic or socio-cultural dimensions.

It is as impossible to classify the great variety of flavors extant on the planet, as it is to encompass all the ways in which food has been utilized within the visual arts. This is why, through its manifold facets, and as a form of labor, food has been greatly valued by the art community. Artists have appealed to food due to the familiarity that it rouses in us all—firstly through affective meaning—, for its intrinsic qualities, as well as due to its manifold cultural significations. Foodstuffs feature in art through their nutritious, ceremonious, ritualistic, familiar, political, commercial, and even ethical dimensions.

In response to its diverse geographies, food is referenced in multiple manners: as raw material for export, as a ritual of communion, as nourishment; as desire, orgiastic or aphrodisiac pleasure, as basic necessity or as an element of imbalance; as intrinsic to cultural identity or as trigger for nostalgia; as a reflection of the sex-based division of labor and of how gender roles are understood, or as economic interest in transnational exchanges, even in struggles for sovereignty.

From an ethical perspective, food allows us to think about nutrition in relation to balance and the lives of other species (animals especially), warning us about forms of exploitation and the mistreatment of animals by the meat industry and its methods of production in various countries. While the consumption of food can be a form of worship, and a marker of distinction—highly fashionable in our gastronomically sophisticated times—it often contrasts with food scarcity for millions around the world. The discrepancy between diners craving an “aesthetic” experience within a wide range of gastronomic consumption, and those merely seeking to satisfy a basic necessity for the labor force, is illustrative of how often food is turned into symbol of status, sublimated pleasure and the privilege of but a few. Nonetheless, the pleasures of the senses—as vulgar or base as they may seem—transverse social class. For instance, a large number of dishes that enjoy great reception in high-end cuisine today were previously disconsidered, since they were the outcome of creativity despite adversity, amongst the lower classes.

We all enjoy food. So, let it be the main excuse to entice our senses, and may this convergence between ways of seeing and knowing lead to a whole new gamut of sensations, readings and discursive possibilities.