The immeasurable dimension of chaos, the life of Rolando Castellón in us 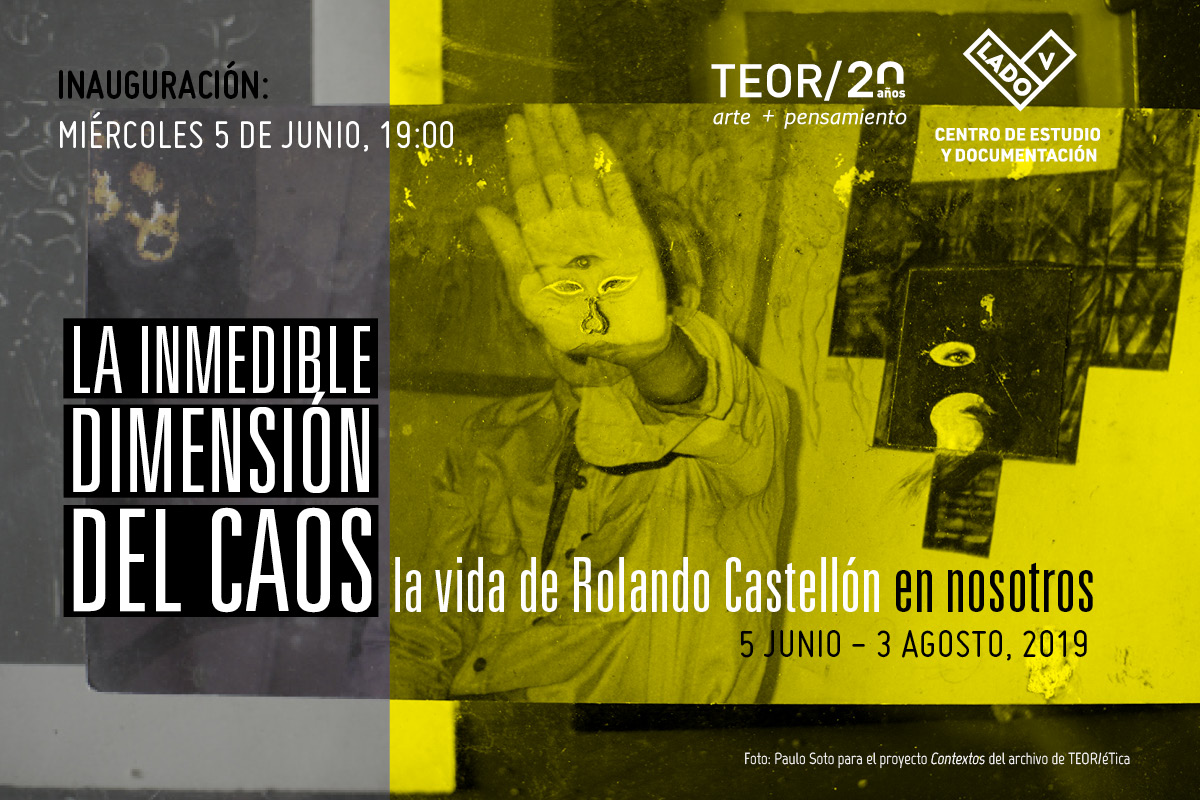 The immeasurable dimension of chaos, the life of Rolando Castellón in us.

The immeasurable dimension of chaos, the life of Rolando Castellón in us, is the result of a series of experimental pedagogy experiences based on the work of Rolando Castellón. Made during the months of March, April and May 2019 in La Garita de Alajuela, in the outskirts of San José. These experiences functioned as a connecting nucleus between contemporary artists and the historical work produced by Castellón throughout its different transformations. Likewise, the experiences allowed to share work processes among a community of artists, prioritizing work and collective exploration. The exhibition intends to elaborate a visual experiment on the forms of knowledge that emerge from the work methodologies of Castellón and at the same time conduct an active tribute as a response to the political potential that exists in the will to produce in total freedom.

The exhibition is produced by TEOR/éTica with the curatorship of Gala Berger, Roberto Carter and Carlos Fernández with the guidance and support of Rolando Castellón. In TEOR/éTica the exhibition is part of the program around the twentieth anniversary of its foundation.

Rolando Castellón is a key figure for the development of contemporary art in Central America. Castellón has worked actively as a visual artist and as a curator. In 1969, he was one of the founding members of Galería de la Raza in San Francisco, a community organization focused on the dissemination and recognition of Latino, Chicano and Central American diaspora artists. His work as a self-taught visual artist, links a multitude of materials and means that go beyond the limits between drawing, installation, objects and socially committed practices. From 1972 to 1981, he was curator of the MIX (Museum Intercommunity Exchange) program of the Museum of Modern Art in San Francisco (SFMOMA) whose main objective was to produce exchanges with the migrant communities of the city. From 1993, Castellón moved to Costa Rica, where in 1994 he started working as curator in chief of the recently inaugurated Museum of Contemporary Art and Design (MADC) where he would work until 1998. Founding member of TEOR / ethics and inexhaustible cultural agitator , Castellón is indisputably one of the most influential artists in the region.

Gala Berger (Villa Gesell, Argentina 1983) is a visual artist and independent curator who lives and works between San José, Costa Rica and Buenos Aires, Argentina. She is co-founder of Museo La Ene (New Energy Museum of Contemporary Art), and the Printed Art Fair of Paraguay, among other projects. Degree in Visual Arts from the National University of Art in Argentina. Scholar of the Visual Arts Laboratory Lipac (2010) of the Artistic Research Center (2011) of the Ditella Program (2013) and the RAW Academie (2019). He has made residencies in South Korea, Finland, Mexico and Brazil. His work has been exhibited in museums and galleries in Argentina, Peru, Sweden, Finland, South Korea, Ecuador, Costa Rica, Canada, United States, Mexico, Brazil, Chile, Colombia, Germany, Guatemala, Ecuador, among others.

Carlos Fernández Rodríguez (San José, 1986). His work has been the subject of numerous individual and collective exhibitions, including presentations at the Tokyo Palace (Paris), MAC (Panama), Fuso (Lisbon), Teor / éTica, Despacio and MADC (San José), 9th Central American Biennial (Guatemala ). It is part of the Kadist collection. He has been awarded the 2017 Random Institute Award as well as the winner of the Freirarum and CAN residence in Switzerland 2019. Since March 2018, Fernández has directed the independent art space Réunion in San José, Costa Rica with Sergio Rojas Chaves.