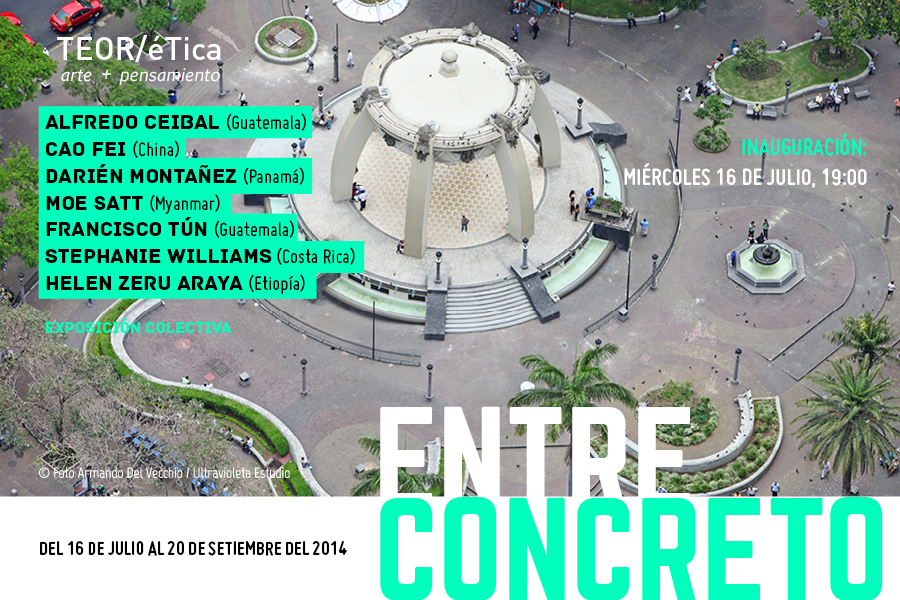 It is paradoxical to think of radical changes in urbanism within a context such as that of San José. The almost inexistent urban planning vision, resulting from a lack of regulatory policies, especially in the last decades, has made this capital a deurbanized city. Instead of aiming towards the construction of public works, which are civic and collective, the current paradigm in San José of urban progress for a future city is primarily based on residential constructions. Private, individualist, housing towers are erected in a homogenous architectonic style (pseudo-modern, pseudo-minimalist). This phenomenon that manifests itself in every corner of the planet where the middle classes have strengthened.

With this exhibition, TEOR/éTica presents works from the perspective of artists from diverse places, who address the interstices that can be found in between the concrete (Entre concreto) of the cities of a future that looms in the present, and explore the urban utopias envisioned by previous generations. The show presents manifestations of both acceleration and petrification underlining the configuration of new urban tissue.

The exhibit begins with an intervention of TEOR/éTica’s façade by Darién Montañez (1977, Panamá), who focuses on Central America’s vertical city, Panamá City, and the way in which development of corporative-global- architecture has been accompanied by the incorporation of a neo-classical pastiche. His work focuses on the presence of the ruins of Western antiquity (Greco-Roman) in current conceptions of progress in his hometown. Also working with the idea of ruins and idealizations of the city, Stephanie Williams (Costa Rica, 1987) constructs replicas of the vestiges of iconic demolished buildings that once belonged to San José’s urban plan at the end of the 19th and beginning of the 20thcentury.

Representations of urban utopias are questioned by artists from the present who address the complex ways of social organization and sociability amongst the inhabitants of possible urban landscapes of the future. The installation by Cao Fei (China, 1978) reflects upon the aesthetics and density that exists in the new urbanization paradigm of 21st century China, which has been adopted by different countries. Her work occurs within the virtual world known as Second Lifein which avatars live in a city comprised by an agglomeration of iconic contemporary buildings, including a tower from Panamá’s skyline. In the case of Alfredo Ceibal (Guatemala, 1954) his utopic architectures, drawn in situ, imagine the development of a metropolis in the American continent, had indigenous civilizations not been colonized. His city proposes other forms of technology and distribution of labor.

In some works, artists generate visual languages to represent the way in which radical urbanization ends up modifying mobility in communities and vernacular living. Such is the case of the seminal painting by Francisco Tún (Guatemala, 1948-1989). The space that Tún constructs in his canvases reveals the dichotomy between the rural areas and the city, which traps its tiny characters in a vast and almost obliterating reality. It is a landscape that dominates the small figures, illustrating the daily struggle of the working classes. The masses of color geometrically depict the rise of urbanization in Guatemala during the 60s and 70s. Meanwhile the film by Moe Satt (Myanmar, 1983) captures culturally inherited skills, which are embodied in the hand gestures of people working in traditional food stalls at a popular market in Burma which is at risk of disappearing in the city’s new urban planning. Likewise, Helen Zeru Araya (Ethiopia, 1987) carries out a performance/ritual in the exhumation of her mother’s grave, who is buried in a cemetery currently in the process of gentrification.

No doubt the majority of people live in cities. The continuous urban agglomeration is an inevitable consequence of the development of current forms of production, be they industrial, service based or even virtual. But, what could be the appropriate city model for each context? And above all, how can we negotiate between the ways of living of these places and the global homogenization of life, which results from current paradigms of urbanization? It may be that each project shown in this exhibition is precisely located just in between the concrete of this negotiation.