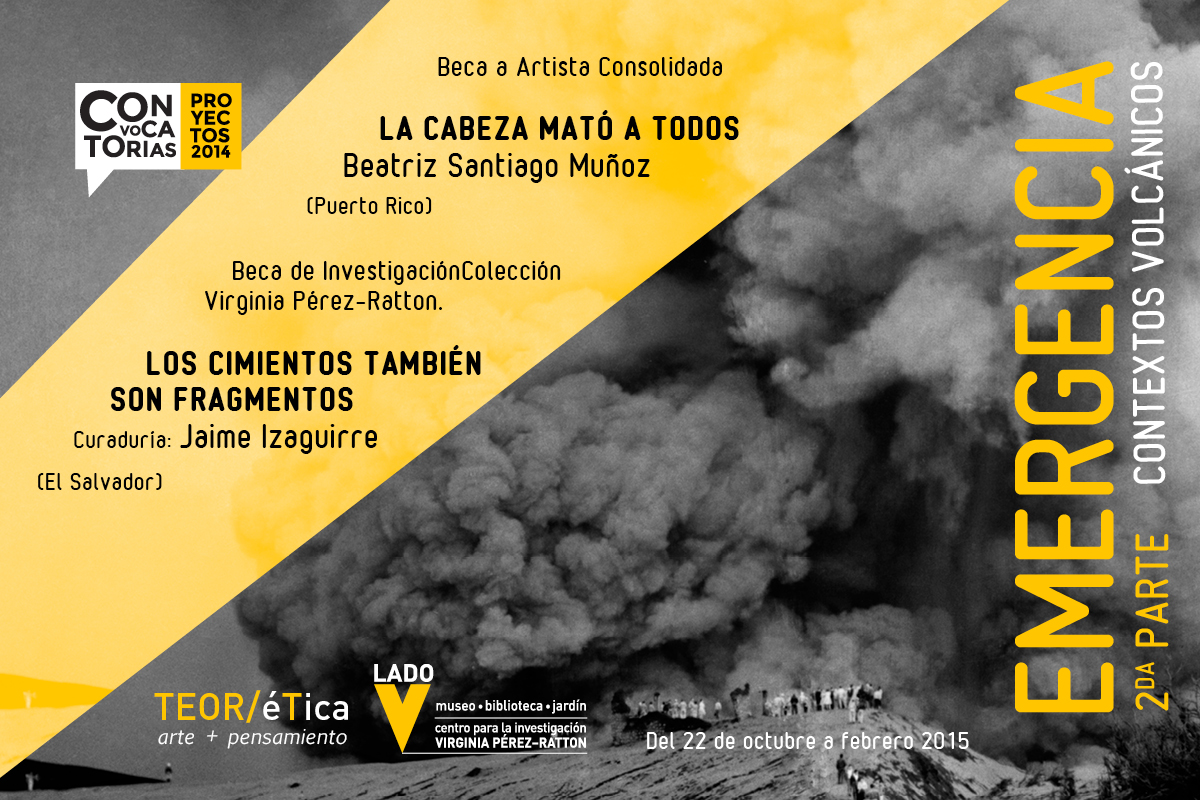 Although the Central American Isthmus and the Caribbean region are connected by underground volcanic chains, and therefore could be considered as a unified geographical region, the countries located in the area are highly diverse and their societies and idiosyncrasies are considerably different. In this regional context, the diverse artistic communities face a double state of emergency. On the one hand, there is the constant emergence of a younger generation of producers in the arts. On the other hand, this younger generation faces a state of emergency related to the limited support for research, development and production of artistic projects.

With the aim of promoting and financing artistic production and curatorial actions, TEOR/éTica and Lado V present the second part of EMERGENCY – volcanic contexts. The projects presented in this event are the 2014 recipients of the Consolidated Artist Grant and the Colección Virginia Pérez-Ratton Research Grant.

Puerto Rican Beatriz Santiago Muñoz is TEOR/éTica’s recipient of the Consolidated Artist Grant. Her work is primarily video art and she produced new work for this exhibition. Based on her research on different aspects of her country’s past, the artist examines Puerto Rico’s current economic and social conditions and explores the ways in which military objects transform the local landscape and foster a series of narratives amongst the inhabitants of a place. Meanwhile, Salvadorian artist and curator Jaime Izaguirre was invited to propose a new reading of the Virginia Pérez-Ratton Collection, by conducting a research project. This initiative responds to TEOR/éTica’s interest in fomenting curatorial practices within the artistic communities of the region, and promoting curatorial discourses utilizing the Virginia Pérez-Ratton Collection as a starting point.

The Head Killed Them All

Mysterious forms that transform the place for military purposes inhabit Puerto Rico’s geography: control towers everywhere, the Lajas aerostat, bombarding camps, abandoned tanks. The uses, consequences, functioning and purposes of these forms are puzzling. The information given by the military apparatus on them appears to be already filtered by the security and order discourse. But these constructions acquire the characteristics of a totem, an ancestral mountain and supernatural enemy to the local inhabitants. The project La cabeza mató a todos revolves around the affective, cosmological and political narratives woven around these figures.

Beatriz Santiago Muñoz (Puerto Rico, 1972) Santiago Muñoz’s work arises from long research periods of observation and documentation, in which the camera is present as an object with social implications and as a mediating instrument of aesthetic thought. Amongst her recent exhibitions are Under the Same Sun: Art From Latin America Today, Guggenheim Museum of Art; The Black Cave, Gasworks, London; Capp Street Project: Beatriz Santiago Muñoz, CCA Wattis, San Francisco; Beatriz Santiago Muñoz, Trinh T Minh-Ha & Gregorio Rocha, TATE Film and VII Bienal do Mercosul. Santiago Muñoz is also co-founder of Beta-Local and director of Sessions, a series of intensive seminaries based on geographic specificity, emerging art and socio-political conditions in Puerto Rico.

The Foundations are Also Fragments

Aiming to be an invitation to construct discourse from the fragment, of particular territories that offer new perspectives on local and regional productions, the exhibition Los cimientos también son fragmentos (The Foundations are Also Fragments) recognizes Virginia’s legacy as part of a continent, that implies firm land, but at the same time, is a fragmented territory, owing to which it is subject to complementation, while also being a complement to other territories.