A Chronicle of Interventions 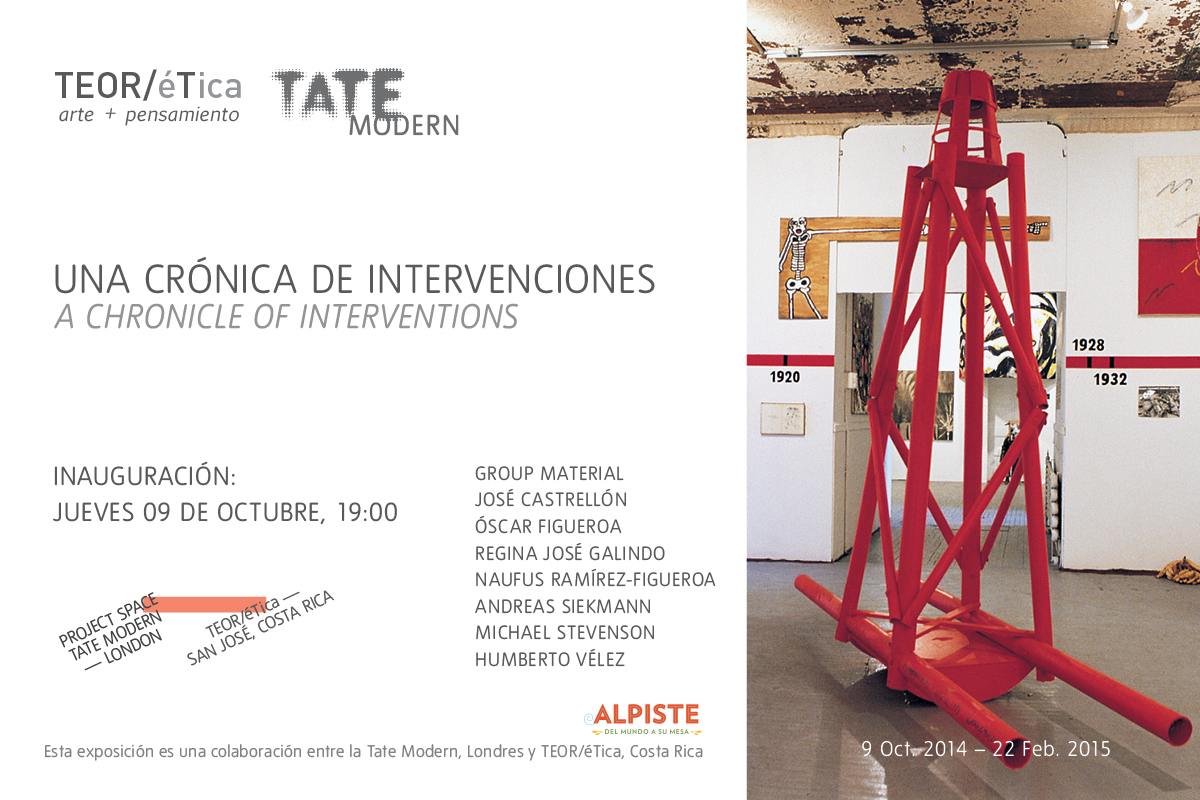 A Chronicle of Interventions

Curated in collaboration with TEOR/éTica an art space in Costa Rica, A Chronicle of Interventions presents a response to the history of economic, political, military and foreign interventions in Central America, a region where TEOR/éTica emerged and has worked since 1999. The exhibition gathers works by artists who, at different moments and across generations, have explored through a variety of approaches – fictitious, poetic, realistic and satirical – a number of these historical interventions that have shaped the contemporary reality of this region.

This exhibition begins by taking us back to 1980’s New York and the Reagan-Thatcher era, a time when Central America was in the spotlight of political and economic debate in the West. In reaction to the US military interventions taking place in Guatemala, Honduras, Nicaragua and El Salvador at the time, and to the humanitarian crisis which was becoming more and more evident through the visceral photojournalism featured in the media, the New York based collective Group Material produced an installation entitled Timeline: A Chronicle of US Intervention in Central and Latin America. Exhibited in the then independent art space PS1 Contemporary Art Center, the project included contributions from more than fifty New York based artists. These were incorporated into Group Material’s timeline structure, an artistic strategy they later developed in their AIDS Timeline (1988). In Timeline: A Chronicle of US Intervention in Central and Latin America, the aim was to create visual references for each of the 161 years of US intervention in the Americas by displaying on the walls, along a prominent red graphic, a variety of existing artworks, replicas and artefacts. These works were submitted through the organisation Artists Call Against US Intervention in Latin America, a nationwide movement active in the early 1980’s which produced a programme of cultural actions and street protests to raise awareness and to support popular/grass roots movements in Latin America.

This exhibition at Tate Modern draws on Group Material’s archive of the 1984 Timeline installation. Following conversations with Group Material members Julie Ault and Douglas Ashford, A Chronicle of Interventions re-establishes the original project’s layout as its starting point, with the aim of focussing attention on the history of foreign intervention and its accompanied violence.

Thirty years later, this exhibition returns to this history of intervention and its consequences, which can be seen still to determine contemporary reality in all fields of society in that region. The exhibition does not attempt to show a chronology of historical events, rather it displays a selection of seven contemporary artists, from Central America as well as from other contexts, who chronicle recent historical episodes, accounts and phenomena. The artists employ these in order to introduce the subjects, discourses, agents and processes that led to and fulfilled a complex series of political, economic and military interventions, without merely denouncing or depicting the horror of visceral violence.

Humberto Vélez’s film The Last Builder, 2008 refers back to nineteenth century US colonialism in Panama; more specifically, it refers to the building of the Panama Canal. Officially opened in August, 1914, after 33 years of construction, the canal, passing between Central and South America, joined the Atlantic and Pacific Oceans. In an elegy to both the early history of cinema and to the art of bodybuilding, Vélez makes reference to the myth of the last black (and, by implication, slave) builder of the canal by using the human body and the notion of human strength as a metaphor for the power of an Empire and the bodies it subjected.

The sustained and complex involvement of the USA in Panama, notably following the signing of the Torrijos-Carter Treaties in 1977 which promised the handover of the Canal Zone to the Central American country, is at the core of Michael Stevenson’s film Introducción a la Teoría de la Probabilidad (Introduction to the Theory of Probability) 2008. This work relates the events surrounding the presence of the Shah of Iran who was in exile in Panama in 1979 on the small island of Contadora. This episode is presented through a narrated script based on the observations of General Torrijos’ chief of security, a mathematician turned bodyguard. Known as Chu Chu, the bodyguard recounts a series of interrelated histories of the island and the intersecting local and global politics of the time, seen through his theories on probability.

Similar to the impact that other, earlier canal projects, such as the Suez Canal in Egypt, had had in the 19th century, the construction of the Panama Canal accelerated the global economy at the beginning of the 20th century. It increased mass production and exportation in the region in a way that also contributed substantially to the development and persistence of economic and cultural domination. The works of Oscar Figueroa and Andreas Siekmann address the existence of a monocultural economy based almost exclusively on the trade in bananas and coffee, and the impact that international corporations such as the United Fruit Company have had in the natural and social landscape of much of Central America.

Óscar Figueroa’s work Demeritos (Demerits) 2013 shows the artist laying out a 3,275 metre line of blue plastic. This line refers to the political history of the banana plantations in Costa Rica and the systematic violence often exerted over their workers. The plastic, originally used to protect bananas from pests, marks out a geographic boundary that was put in place by the United Fruit Company in the 1920’s to limit the movement of its workers and prevent them from travelling beyond a specified territory. The barrier was approved on the pretext of preventing certain diseases from entering the capital city of San Jose, but was in fact a blockade to stop the black population of plantation workers from migrating to the capital. In the case of Andreas Siekmann, a two-part commission, maps the prevalence of monocultural economies in the region. Engaging in research based practice that traces economic patterns and systems, Siekmann’s work takes on a variety of forms, often incorporating symbols appropriated from Otto Neurath’s Gesellschaft und Wirtschaft  – Bildstatistisches Elementarwerk (Society and Economy – Elementary Pictorial Statistics) 1930, a publication on information visualisation that was groundbreaking for its time.

Exploring unequal power relations and the often violent consequences that have resulted from economic interventions, Regina Jose Galindo’s performance video Tierra (Land) 2013 confronts the political history of Guatemala and its genocide. In reference to witness statements of massacres and mass interments committed during the 1980’s dictatorship of José Efraín Rios Montt, Galindo’s video shows the artist standing naked and alone in a field while a bulldozer digs what appears to be a mass grave around her. Her work sheds light on the atrocities that have occurred within a country during a civil war that has been fuelled by international intervention, and owing to which approximately 200,000 people, many of indigenous descent, died or went missing.

This exhibition also explores the aesthetic traces of external intervention in changing social trends. These include examples of both the infiltration and appropriation of ‘Western’ culture as seen in the work of Jose Castrellón, as well as the imposition or adaptation of international architectural styles as part of the performance work of Naufus Ramírez-Figueroa.

The ongoing series Kuna Metal, 2013 by Castrellón, explores an unexpected parallel which has arisen between the traditions of the indigenous Kuna tribe, a people native to the archipelagos of the Caribbean Panama coast, and the anti-establishment nature of punk metal bands. The work highlights this cultural amalgamation through photographic portraiture of these Kunametal singers, and a video that brings together the image of a small paradisiacal island, populated by the tribe, with a punk metal soundtrack. Castrellón’s work demonstrates the specificity of cultural hybridity as found in this experience of globalisation.

The inclusion of Castrellón’s work contrasts with the aggressive nature of enforced external intervention and internal adoption of both colonial and modern cultural expressions. Naufus Ramírez Figueroa’s A Brief History of Architecture in Guatemala, 2010 demonstrates such interventions by parodying the history of urbanisation in Guatemala. First performed in 2010, the work addresses the impositions and influences of external cultures and the traces which they have left behind; through three costumes that encompass the country’s architectural history; a Mayan pyramid, a colonial baroque church and a twentieth-century modernist building. Dancing to the melody of a marimba rhythm, the performers, each wearing a building-costume, eventually collide with one another until their costumes are destroyed revealing them to be naked. The work suggests the violent tension of existence amongst competing cultural genealogies.

Group Material’s Timeline: A Chronicle of US Intervention in Central and Latin America, 1984 may well speak more about American anti-establishment and leftist anti-war generations rather than voice, or properly represent, the true context of Central America. Although Timeline included Latin American artists living in exile in New York, the exhibition, due to the socio-political complexities and limited means of communication of the time, lacked the inclusion of artistic and intellectual production from the region itself. Nevertheless, Timeline serves us still today as a witness to a wave of artistic production and cultural activism that felt complicit with and entitled to speak about a foreign place from a position of solidarity. In this way it addressed a crisis that concerned the world, one that forever placed Central America within the reshaping of the ideological history of the twentieth century. It is our intention, by accepting the challenge to re-interpret, rather than simply restage, this work at Tate Modern and later at TEOR/éTica, to reignite the conversation on this region’s past, present and future.