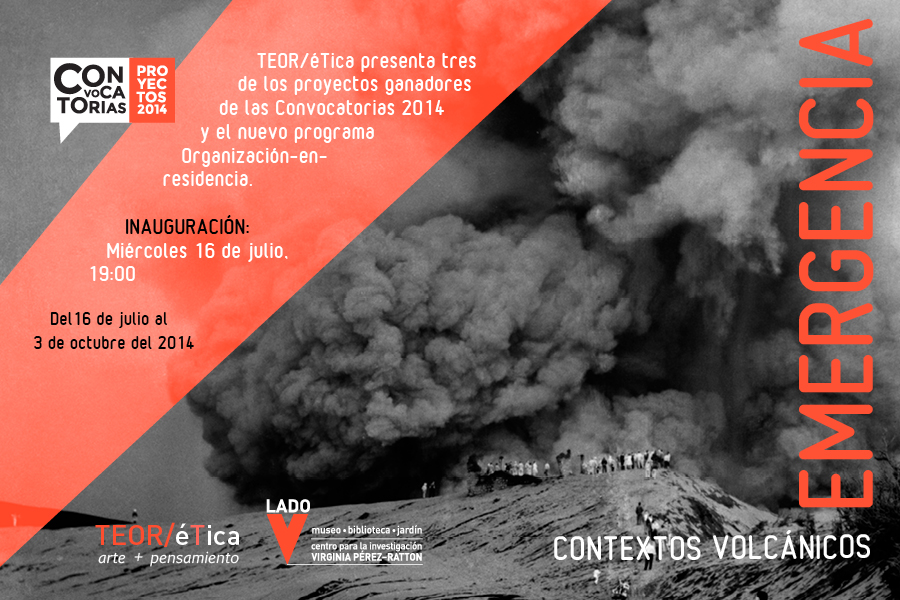 Although the Central American Isthmus and the Caribbean region are connected by underground volcanic chains, and therefore could be considered as a unified geographical region, the countries located in the area are highly diverse and their societies and idiosyncrasies are considerably different. In this regional context, the diverse artistic communities face a double state of emergency. On the one hand, there is the constant emergence of a younger generation of producers in the arts. On the other hand, this younger generation faces a state of emergency related with the limitations to find support for research and the development and production of artistic projects.

With the aim of promoting and financing artistic production and curatorial practice and essay writing in Central America and the Caribbean, TEOR/éTica and Lado V present EMERGENCY – volcanic contexts. This event includes three of the winning projects of the Open Calls for 2014. In addition an invited curatorial project will participate as part of our new program Organization-in-residence.

Two emerging artists from artistic fields rarely seen in San Jose are part of this event. Minia Biabiany is a Guadeloupian artist who presents Envolvernos en la lluvia (To envelop us in the rain); Engel Leonardo is a Dominican artist whose project is Pedernales (Pillars). From different perspectives, these works explore artistic practice from the specificity of a place, whether spatial, grammatical, social, historical or political.

The two curatorial projects presented in this event respond to a special interest of TEOR/éTica and Lado V in promoting and encouraging relevant discourses within the artistic communities in the region.

The group exhibition La generación del encierro. Arte salvadoreño (The generation of confinement. Salvadorian art) by In Situ (Organization-in-residence 2014) shows the ideas of a young generation of Salvadorian artists that, alongside with the need to generate alternative artistic discourses in their country, have explored interesting introspective and subjective representations. The curatorial project Segundo Premio (Second Prize, inner of the Curatorial Open Call 2014) by Ramón Zafrani and Luisa Fuentes Guaza, promotes the crosstalk between works of artists from Central American and the Caribbean as well as from other parts of the world. This curatorial project questions the automatization that takes place during the construction of the social identities.

To envelop us in the rain

For the Project Envolvernos en la lluvia (To envelop us in the rain), the artist Minia Biabiany proposes a journey: from line to drawing, to string, to writing, to text. Within the installation, text is a relational space. By making use of quotes and sayings in different languages, the work constructs a mental territory of pluralities, of histories, experiences and exiles, both of geography, as of the body itself. This is why movement is inseparable from vision, not only by making the installation inhabit the site, but by placing the site within the installation as well.

Conceived specifically for Lado V’s La Vitrina, this work is constructed from a silent weft of bodies, times, atmospheres and writing, as well as from the elements that constitute the place where it is being exhibited: rocks, tiles, doors, windows, walls, the plant that climbs them, the light and the humidity. Thus, this space constitutes a border; just like the time between inhalation and exhalation, the place breathes. The green weave of the Ficus Pumila, the weed that covers great part of La Vitrina and Lado V, conveys the feeling of enveloping us in the rain. Between these elements, mobile and immobile, and the installation exhibited here, an archipelago is drawn, one that constitutes the poetics of this project. We walk with the eyes and the body, and the displacement, both of the body as of the gaze, leaves a line behind, just like the different material associations that construct this project do.

Minia Biabiany (1988, Basse-Terre, Guadeloupe). BFA l’Ecole Nationale Supérieure des Beaux Arts Lyon, France, 2011. Her work has been exhibited in different shows in Marseille, Lyon and Paris in France, and in Mexico City. She is currently in residence at La cité des arts in Paris.

The abstraction, synthesis, modification and appropriation of the visible artisanal materials in the pieces that constitute Pedernales (Pillars), a project by the artist Engel Leonardo, result from a research and documentation work of artisanal practices in the border area between Haiti and Dominican Republic. After several trips to villages that lie between these two countries, Engel’s proposal focuses on the elaboration of traditional chairs and hats (made by Haitian and Dominican artisans) crafted with local materials, natural fibers and hand-woven quilts, also used in the making of baskets, bags and even architectural elements.

The global commercialization of industrially manufactured products on a massive scale has modified the vernacular aesthetic practices. Due to the easy acquisition of imported industrial products, these phenomena have led to major changes in the elaboration and demand of functional and decorative crafts, and puts at risk the permanence and continuity of traditional crafts in the island of Dominican Republic and Haiti.

The migration policies and the border situation between these two countries have generated a number of current and historical conflicts of important social and political relevance for the island, Latin America and the world. Given its geographical location, the southwestern area of the island is one of the poorest and most sparsely populated regions of the country. This condition, as evidenced by the isolation and difficult access to the dynamics of urban merchant centers and of greater wealth in the country, has made possible a long lasting demand and manufacturing of traditional crafts, a production that is currently in a mutant state and will possibly become obsolete.

The curatorial project Second Prize by Ramón Zafrani and Luisa Fuentes Guaza investigates processes implemented in Spain, Nicaragua, Panama, Guatemala and Puerto Rico that question those narratives that have been assumed in an automatized manner, and which have led to the construction of a social identity or to the assimilation of the dynamics that build the social, political and architectural fabric.

We live in a context that tends to the “hyper-modernization”. In this context a psychological process that responds to certain successful mechanisms that has positivism as its philosophical basis, is activated. This situation makes us assume the social, political and architectural modifications without a critical attitude towards them. In addition, we have been taught to succeed in order to become part of a society that promotes competitiveness.

Ambition, characterized by the need to receive the “prize”, refers to the concept of cajanegrización, which involves the automated process of learning mechanisms that lead to success. Bruno Latour defines it as “the way in which scientific or technical work becomes invisible because of its own success. When a machine runs efficiently or an event is firmly established, one only needs to focus on the profits that one generates and not on the interior complexity. Thus, paradoxically, it happens that the more successful science and technology are the more opaque they become”.

Second prize focuses specifically on those cases that fail to attain the first place, not because they are failures or inadequate, but for activating analytical processes more openly and less predictably. Second prize intends to represent a disruption with the automatic review by an attitude that challenges the expected typical narratives. This attitude is defined as descajanegrización which is the examination of complex attitudes that because of its successful operation have been absorbed into the social fabric in an automated way.

Ramón Zafrani (1973, Panama City, Panama) Architect by the University of Illinois at Chicago.  He is co-founder of Fémur.  As a curator he was part of the team of Ciudad Multiple City; curated the Panama show for the V Bienal de Arte del Caribe and the museography for the 7 Bienal de Arte de Panama.  His writings and photographic essays have been published in the book Ciudad Múltiple City: Urban Art and Global Cities: an Experiment in Context and in the Magazine Review 74 (Amercias Society, NY).

The generation of confinement. Salvadorian Art.

As a response to the increasing social violence experienced in El Salvador since the 70s, which derived in a civil war in the 80s, that later gave way to the appearance of the maras (gangs) in the 90s, private residential areas and secured recreational areas, such as Metrocentro in San Salvador (the biggest mall in Central America) surfaced. Also, there has been an increase in private security companies (today, there is more private security personnel than there is in the army and police combined) and security measures in houses have been developed that make them look more like cages than actual living spaces.

In the mid-90s, these situations occurred parallel to the rise of cable television, videogames, Internet, computers and portable gadgets, making “staying in” more “comfortable”, and communications more closer and constant, yet less personal, a matter that has escalated in the last years.

This context affects artistic production and in El Salvador this change is visible. After more than ten years of tackling themes of social violence and maras, at present, many works refer to a “from within”: reflections and approaches about the “I”, about confinement, the everyday, the construction of landscapes, intimacy, sensuality or sexuality.

In Situ is a project by Jaime Izaguirre and Mauricio Esquivel that began in 2013 as a space for study that evolved into a space of dialogue, production of projects, research and alternative artistic formation. Its headquarters are in a space of La Casa Tomada (in El Salvador), an alliance with the Centro Cultural de España.