What is written, written remains. 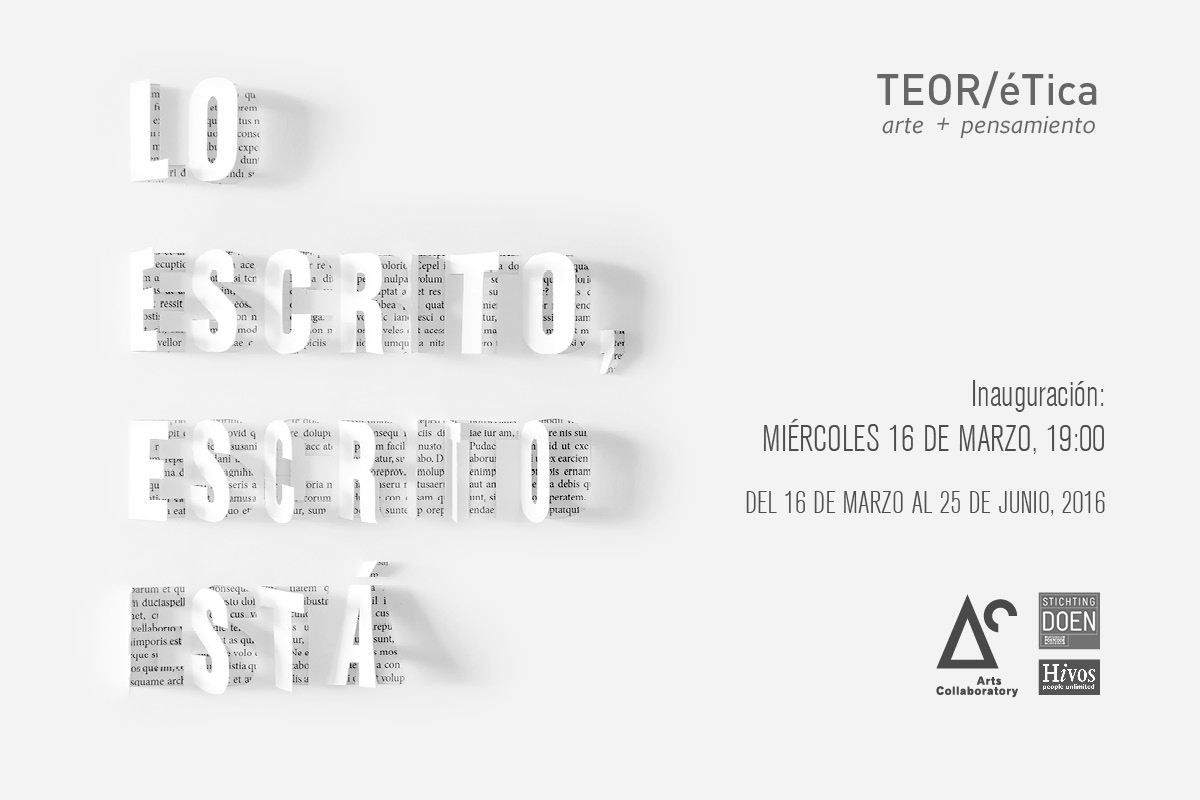 What is written, written remains.

Downloadable poster of the exhibition

John 19:22 tells that Pilate exclaimed the phrase that would become an eternal sentence. Thus, authority condemned written history to be an untouchable archive, incapable of being re-written or erased, because what has been written, written remains. “Spoken words fly, written words remain,” Caius Titus had said, accusing the text, as Plato would, of not responding to the questions asked to it, of being victim of an immobility and silence that is only broken when the reader lends it some type of voice.

What History wrote became unquestionable. Once the text had been inscribed, it was no longer possible to re-write or erase it. Nonetheless, in between the lines, memory’s voids, omissions, constant absences or mistakes became evident. From the margin, this began to be noted. The blank space started to reveal what the text did not say. In it, new narratives that could expand, question, or even revert established notions began to be written.

In that sense, this emptiness is also a space for enunciation, from where absences can be read and in which other representations can be inscribed. In some way, this exhibition began to take shape somewhat in the form of this blank space, from where – through the support for the creation of new works, or by exhibiting recent works that have had little visibility or have not been shown at all – it is possible to revisit memories and stories that contribute to the writing of the other history.

The artists present here share the use of the written word as a way of destabilizing hegemonic powers, in turn questioning accepted representations in the Costa Rican imaginary. Text is utilized as a mechanism to create portraits or histories that make visible issues, communities or people that have often been relegated to the margins of History – or whose representation has been distorted or negated. In this manner, the written is in itself a strategy to revert already inscribed meanings or discourses, as well as to highlight the voids and omissions of collective memory.

Presented in a variety of media, many of these works express concerns arising from personal experiences. These perspectives aim to transcend the establishment, reflecting upon how hegemonic discourses are constructed and what it is that they really attempt to communicate and institute. What is presented here in the written form does not only inscribe phrases on a support, it is also an invitation to read what is being said and what is not, in order to think about how a history, a memory and an argument are constructed.

The text is, then, not what Plato condemned: the silent word on paper that does not emit an answer. Although there is no explicit response, the written opens spaces for debate. By coinciding, art and letter actively confront us, asking questions that trigger associations and further inquiries. Therefore, I would like to allow the work present here to spell out these artists’ denunciations, criticism and concerns, so that the exhibition may become an exercise through which to read those experiences, in order to confront and delve into the system’s fissures.