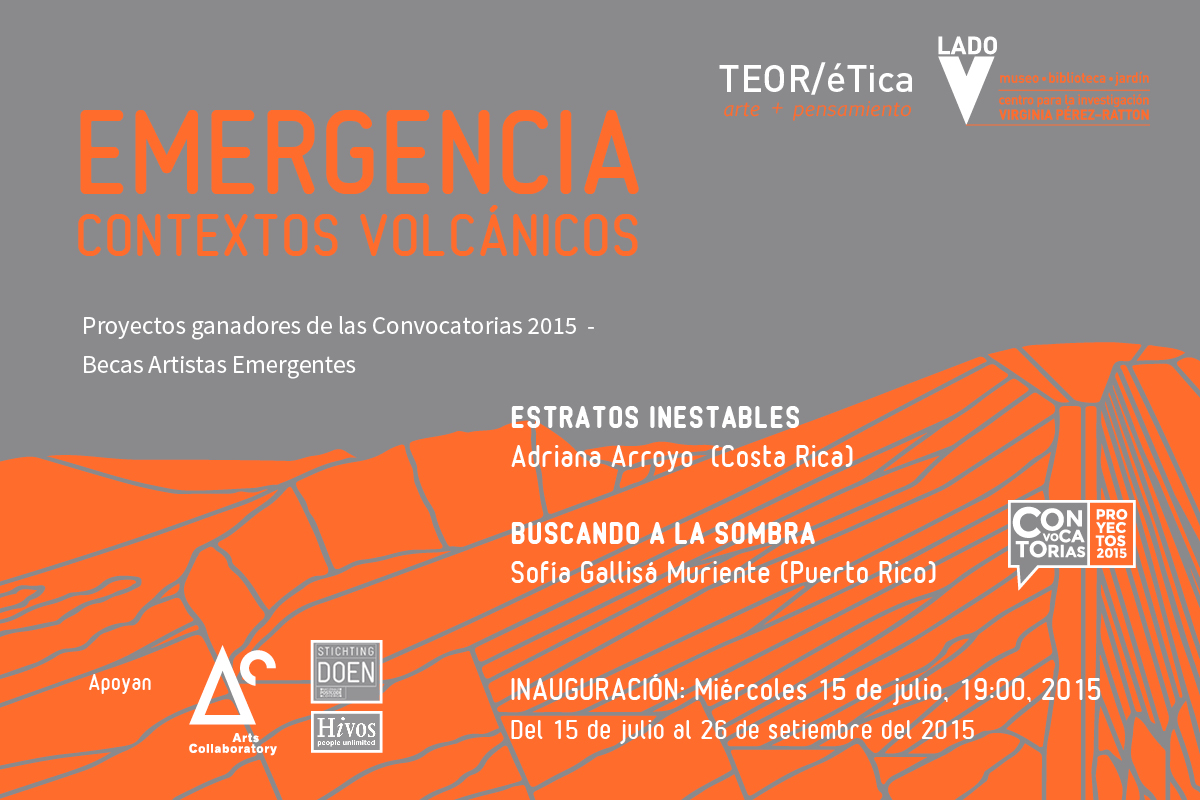 Although the Central American Isthmus and the Caribbean region are connected by underground volcanic chains, and therefore could be considered as a unified geographical region, the countries located in the area are highly diverse and their societies and idiosyncrasies are considerably different. In this regional context, the diverse artistic communities face a double state of emergency. On the one hand, there is the constant emergence of a younger generation of producers in the arts. On the other hand, this younger generation faces a state of emergency related with the limitations to find support for research and the development and production of artistic projects.

With the aim of promoting and financing artistic production and curatorial actions, TEOR/éTica and Lado V present the third part of EMERGENCY – volcanic contexts. The projects presented in this event are the 2015 recipients of the Emerging Artists Grant.

Buscando a La Sombra (Searching for La Sombra) by Sofía Gallisá is an effort to rescue the historic and affective memory of Carlos “La Sombra” Torres Meléndez, long-time inmate and founder of the Asociación Pro-Derechos del Confinado (Pro-Inmates Rights Association) from Puerto Rico, also known as los Ñetas. The investigation begins with the memories of those who knew him, combining personal anecdotes and archives with documents of the time and pieces produced throughout the investigation process, in order to generate a portrait that incorporates subjectivities, languages and forms. The reformulation of the Ñetas’ utopic thinking, from an irremediably crude and violent reality, is one of the tensions that functions as an axis for the project. Carlos “La Sombra” is a figure that harbors many of these apparent contradictions and manifests their wider possibilities. The formal proposal of this project arises from an interest in generating new forms of documentation, that respond to the neglect of institutional archives in order to make visible historic and ideological construction processes. Beyond an artistic proposal, Gallisá conceives this project as a resource and reference to other investigations, which in turn generate new documents with a different materiality that may size up the implications of the subject of study from a current perspective, open to poetic epistemology and language.

This project exists thanks to the generosity of many collaborators. Thanks in particular to everyone who has shared memories and materials from their personal archives, as well as those who have helped make sense out of them.

Graduated in film and television production, and Latin American studies at New York University. Multidisciplinary artist, has worked under the tutelage of pioneer documentary filmmaker Albert Maysles, and collaborated with experimental filmmaker Lynne Sachs and artist Mary Walling Blackburn. Her work has been presented at the Trienal Poligráfica in San Juan, Festival de Nuevo Cine Latinoamericano in Cuba, Walker Art Center and more recently at the Museo de Arte Latinoamericano in Buenos Aires. She is one of the founders of IndigNación and co-founder of Restore the Rock. She currently directs La Iván Illich, an experimental pedagogical platform in Beta-Local, an organization dedicated to encouraging aesthetic thought and practices in Puerto Rico.

To live in the Pacific Ring of Fire is to be in a constant state of alert. In Costa Rica, for example, the trauma of the 1991 Limón earthquake is still present, or more recently, the memory of the damage caused by the Cinchona earthquake in 2009. Both events marked the country’s collective memory. Accustomed to the paused motion of daily life in this latitude, the earth’s constant movement is a persistent reminder of the illusion of immobility and lack of change. Taking these natural phenomena as a metaphor, Adriana Arroyo explores what she calls “the insistent and incessant movement of things.” Beyond the physical or geological displacement, her work investigates the traces left by economic, political or bodily movement.  The works utilize the idea of layers, symbolical strata that show the marks of movement in different matter: the sound of an intervened vinyl record, obsolete bills on the floor, or the register in plaster of the trace left by use in leather. But beyond this, there is an attempt to reveal how these movements become history, a materialized history that expands and transforms with time.

Costa Rican visual artist. In 1999 she received a scholarship from the United World College to do the International Baccalaureate in Waterford Kamhlaba United World College in Swaziland. In 2007 she graduated with honors from the University of Brighton in the United Kingdom. In 2011 she received a scholarship for the Postgraduate program in Visual Arts at the de Atelier Institute in Amsterdam. Recent exhibitions include Unstable Strata, Gabriel Rolt Gallery, Amsterdam, Structures form layers, forms layer structures, layers structure forms, KM Gallery, Berlín, A Paradise Built in Hell, Kunstverein in Hamburg, amongst others. She lives and works in Berlin, Germany.