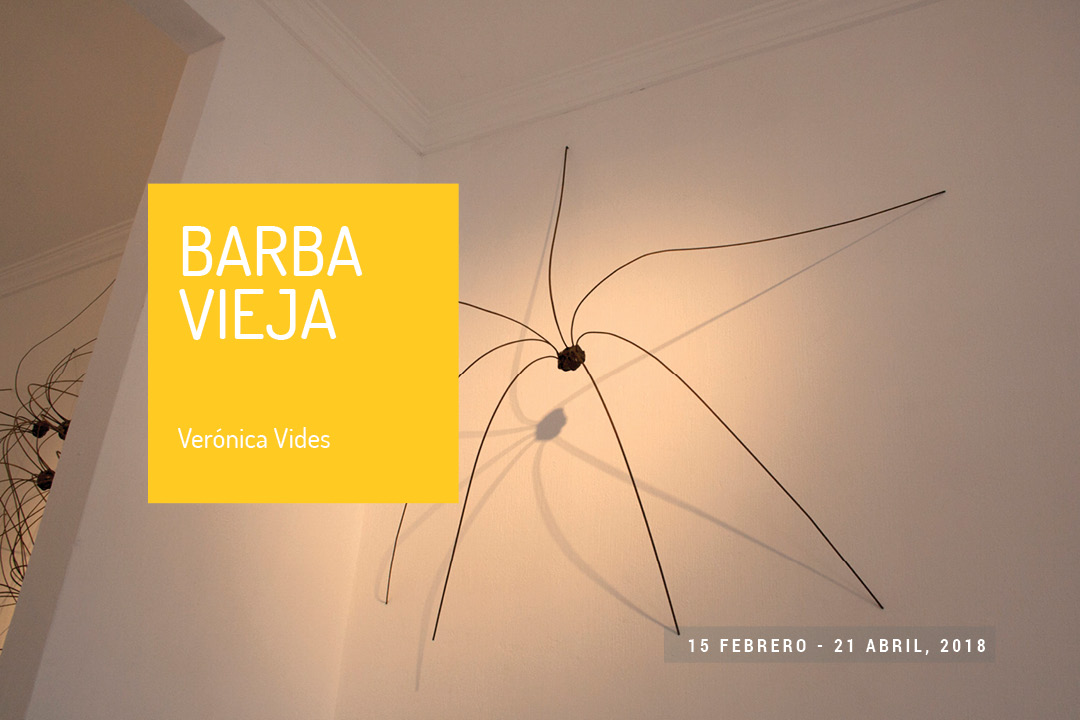 This work by Salvadoran artist was originally presented in Galería Sol del Río in Guatemala (2009), and later in De Gallery, in San Salvador (2010). This installation is part of a series of explorations about nature, through industrial elements – such as forged iron – mark tensions regarding the natural environment and the city’s growth. Vides converts wires, scraps and wrought iron into organic beings as a comment on the possibilities of responding to consumption, industrialization and its contaminating effects.

The precise way in which Vides works with metal, exalts the strength, precision and subtlety of the line. The rusted iron talks about the passage of time, that has has slowly worn away the fragile and delicate bodies of these beings. The power of the light and the shadows projected onto the wall awakens our way of seeing, allowing us to image the presence of other beings within the space. The visual and spatial saturation becomes invasive and overwhelming. Barba Vieja takes us beyond the visual language and imagination exploration, to bring us closer to a sensorial experience, exalted by the freedom of the use of space.

This work is part of the Virginia Pérez-Ratton Collection since 2010 and is exhibited in Costa Rica for the first time. The original assembly consisted of 53 recycled iron spiders. The installation shown here is composed of 12 spiders. Most of the other pieces were sold by the artist individually, with which this group is the only group that remains as such.

Was born in San Salvador, El Salvador, 1970 / Currently lives and works in Patagonia, Argentina. Is a member of the group ADOBE. In 1997 she had her first individual show on sculpture. In 2000 she received a scholarship for the School of Plastic Arts La Esmeralda in Mexico City. In 2003 she obtained the first place in JUANNIO, at the Museum of Modern Art in Guatemala. She received the first place for the II Paiz Biennial of Art in El Salvador and first place in HABITART, installation competition organized by Kent at a Central American level. In November 2004 she received an honorary mention in the IV Bienal of Visual Arts of the Central American Isthmus, Panama. That same year, her work was included as part of Costa Rica’s Museum of Contemporary Art and Design’s Collection. She was also invited by the Museum of Art in El Salvador (MARTE), to exhibit her sculptural installation Iron Moths, for a year.