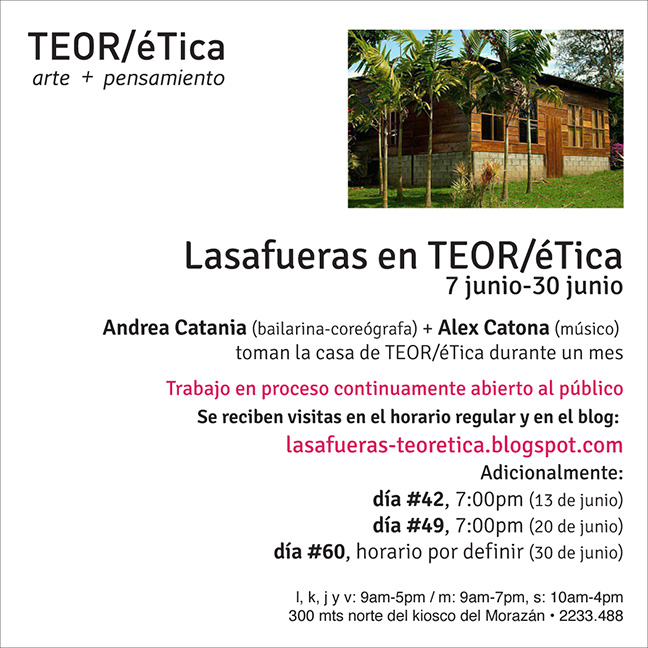 A project by Andrea Catania and Alex Catona

Teatro Las afueras (Lasafueras Theater), an interdisciplinary laboratory conformed by Andrea Cataniaand Alex Catona, took over the TEOR/éTica house during the month of July of 2012, seeking to create a corporeal experience that expanded in time and space and intermixed different artistic media.

This intervention became a way to conceptually celebrateTEOR/éTica’s anniversary, in the year of its instritutional reconfiguration, by confronting the public with a creative process rooted in the immediate present.

For a month, these artists occupied the rooms of the TEOR/éTica house, where they rehearsed, built contraptions, played music, danced, covered a staircase with tape and filled a room with green lights, mirror images and strange sounds; they also shared recipes, prologues and poetry on a blog (http://lasafueras-teoretica.blogspot.com), and invited people to talk, dine, drink beer, get pathetic with Leonard Cohen and play the divas. The artists also played two or three movies simultaneously on facing televisions, bringing about conversations between characters from different galaxies and got in a trunk and played the saxophone, etc…

The space functioned during its regular hours, allowing people to visit and observe the different processes that Alex and Andrea set in motion here.

Additionally, the space remained open during some nights, during which certain “cuts” of the process were presented. These “cuts” were held on Day #42, Day #49 and Day #60.

The first reason is that contemprary choreography works with concepts that in the visual arts are manifested through performance; and perhaps it is today’s dancers, like those ofLasafueras Theater, who are experimenting the most with the relationships between body, space, subjectivity and spectator emancipation.

Moreover, we wanted to see how an artistic institution located in the city’s center could accommodate a dance project that had long ago decided to exit the metropolis and establish itself in Jaboncillal (a rural area of San Jose) in order to create a choreographical center without parameters and archetypes about artistic creation. Costa Rica has a strong tradition and institutionality in the scenic arts, and with this project we sought to find a way in which a visual arts institution could become an interdisciplinary space, a platform for exchange between all the agents that we think of from the space artistic practices.

Teatro Las afueras (Lasafueras Theater) is a physical theater and a scenic experimentation group formerly known as Tomahawktheater, founded by Andrea Catania and Alex Catona in Berlin in 2003. From its beginnings it has sought to form a language of its own, in order to express its artistic concerns and its own cutting edge seal, both recognizable and difficult to classify.

Influenced by the Russian filmmaker Andrei Tarkovski’s dogma “The work of the artist is to generate questions, not answers.”. Teatro Las afueras (Lasafueras Theater), has independently produced many shows. More information in ‘artist’ page.